Just like an acrobatic duo, some proteins lend each other stability. Researchers led by Prof. Sebastian Hiller at the Biozentrum, University of Basel, have discovered that the protein “Trigger factor” recognizes a partner by instable, flexible domains, to then together form a stable protein duo. The study has been published in the current issue of “Nature Communications”. 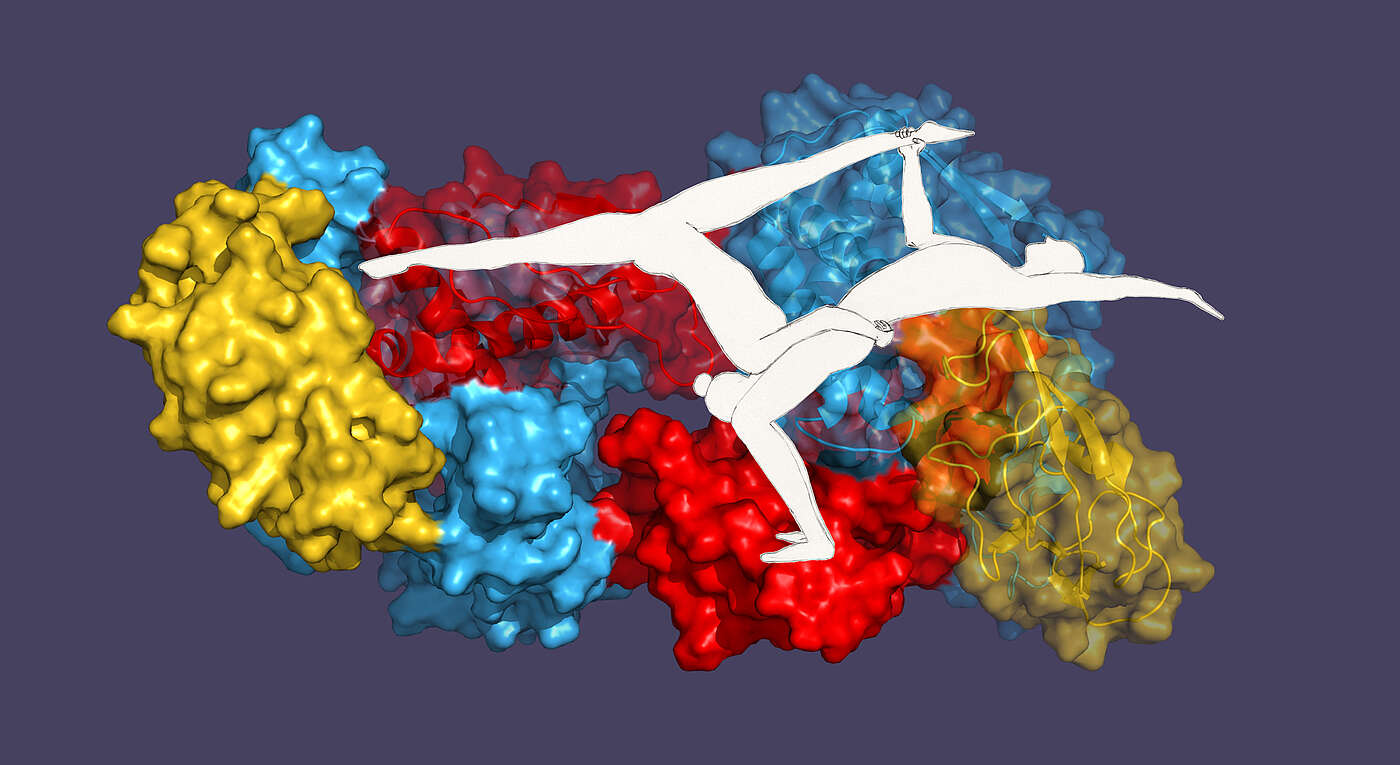 Like an acrobatic duo – single proteins lend each other greater stability.

Misfolded proteins are non-functional and cause cell damage. In order to prevent this, there is a whole arsenal of proteins – called chaperones – that assist with folding and carry out quality control. In the bacterium Escherichia coli, the chaperone “Trigger factor” (TF) protects the newly produced proteins from misfolding. Prof. Sebastian Hiller’s research group at the Biozentrum, University of Basel, has now shown for the first time that TFs also recognize and stabilize each other. Just like single acrobats from a duo, single TF chaperones stand on shaky legs. Only as a pair they find a stable position.

Chaperones help folding of other proteins
Within one single bacterial cell, more than 10‘000 ribosomes produce proteins non-stop. These factories link the individual protein components to form a long peptide chain and transport it outwards through a narrow channel. The chaperone TF, which is bound to the tunnel exit of the ribosome, receives the freshly assembled protein and, while shielding it from the environment, helps it to fold correctly. When the protein has found its correct spatial structure, it is released from the chaperone and can get on with its work in the cell.

Whether acrobat or chaperone – stability only as a duo
In the cell, there are considerably more TF proteins than ribosomes. This ensures that the X-thousand ribosomes are fully occupied and that each of the newly produced proteins can be collected. The surplus TF proteins, like acrobatic pairs, join with a partner to form a stable duo. The pairing happens completely on its own. “In unpaired TF proteins the region that would bind to the ribosome is folded unfavorably and therefore energetically unstable,” explains Hiller. “In the search for an energetically favorable, stable structure, this labile domain is continuously reoriented. TFs are able to detect such dynamic regions of a protein, also among each other." In combining, the two instable TF proteins, like two acrobats connecting at the crucial point, form a stable spatial arrangement.

Chaperones detect dynamic protein domains
“The latest findings about the dynamics of stable ‘TF duos’ make it possible to draw important conclusions about the functioning of chaperones. Upon recognition, they do not form just one type of protein structure but rather a dynamic ensemble of different spatial arrangements,” says Hiller. “It is becoming apparent that this functionality is a general pattern for chaperones.” The elucidation and understanding of the chaperone function at the atomic level is important to the research community worldwide. Problems in the folding process of proteins are associated with various diseases such as the metabolic disorder Cystic fibrosis, cancer or Alzheimer’s disease.