In order to get rid of unpleasant competitors, some bacteria use a sophisticated weapon - a nanosized speargun. Researchers led by Prof. Marek Basler at the Biozentrum, University of Basel, have now gained new insights into the construction, mode of action and recycling of this weapon. As they report in the journal "Nature Microbiology", the speargun drills a hole into the neighboring cells in only a few thousandths of a second and injects a cocktail of toxins. 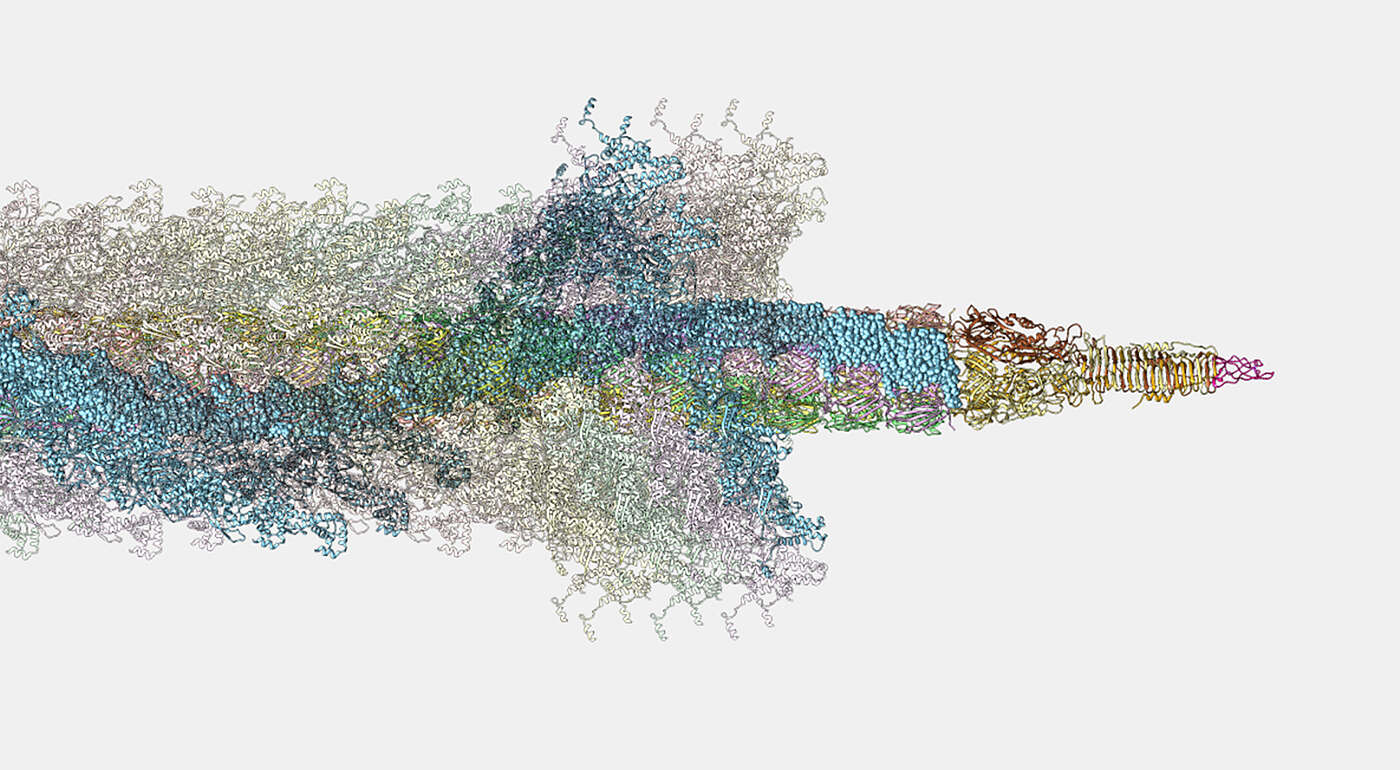 Millions of tiny microbes on leaves, stones or our skin jostle for space. And almost everywhere they have to compete for resources and nutrients. In the course of evolution, some bacteria have therefore developed a weapon to inject a toxic cocktail into competitors and rivals in their neighborhood, thus eliminating them. Among experts, this weapon resembling a speargun is also known as the type VI secretion system (T6SS).

Two years ago, Prof. Marek Basler was able to elucidate the atomic structure of the speargun in the “post firing” state. In the current study, which was carried out in cooperation with various research groups and technology platforms at the Biozentrum, his team has now solved the structure of the “ready to fire” speargun. Based on these findings, the researchers have been able to model how this T6SS speargun works.

Structure of nanosized speargun changes during firing
The speargun is composed of various components, including a sheath and a spear with a sharp tip. The sheath consists of over 200 connected cogwheel-like protein rings that are assembled around the inner rigid spear. When T6SS fires, the sheath rapidly contracts and pushes the toxic spear out of the cell, which can then penetrate into neighboring cells where it releases deadly toxins. “So far, there have only been assumptions as to how the structure of the T6SS sheath changes during contraction," says Basler. "Using cryo-electron microscopy available at C-CINA, we have now obtained an image of the spear and the extended sheath in atomic resolution."

By comparing the structures of the extended and contracted states, the researchers were able to model how the T6SS works in detail. “During the sheath contraction, ring after ring turns and gets closer to the previous ring, while the ring diameter expands and thus releases the spear," explains Basler. “This combination of sheath shrinking and turning results in drilling a hole into the target cells. Within less than two milliseconds, the T6SS sheath contracts to half of its length and at the same time the toxic spear spirals out like a screw. Therefore, the bacteria have an extremely powerful drill." (video)

Only contracted T6SS sheaths are disassembled
Furthermore, the researchers also addressed another question. After firing T6SS, bacteria re-use the individual components of the sheath to assemble a new speargun. “For a long time, it was not clear why only the contracted, but not the extended sheath is disassembled," says Basler. “Now, we could see that a certain protein domain is exposed on the surface of the sheath during contraction and can be recognized by a specific protein responsible for dismantling the sheath. In the extended sheath state, this domain is hidden and the T6SS sheath is therefore protected from disassembly.”

The bacterial speargun will continue to be the subject of future research. “One of our projects is dedicated to the question of how the T6SS is embedded in the bacterial cell envelope. As the speargun is fired with such a high force, it must be firmly anchored, otherwise firing would not work properly or could be also fatal for the weapon-carrying bacteria themselves."