Through duplication of genetic material cells can acquire new functions. This process may give rise to new cell types with unique properties. Prof. Alex Schier’s research group at the Biozentrum, University of Basel, has now been able to demonstrate that gene duplication has generated new cell types in fish, thus supporting a classic theory of evolutionary biology. 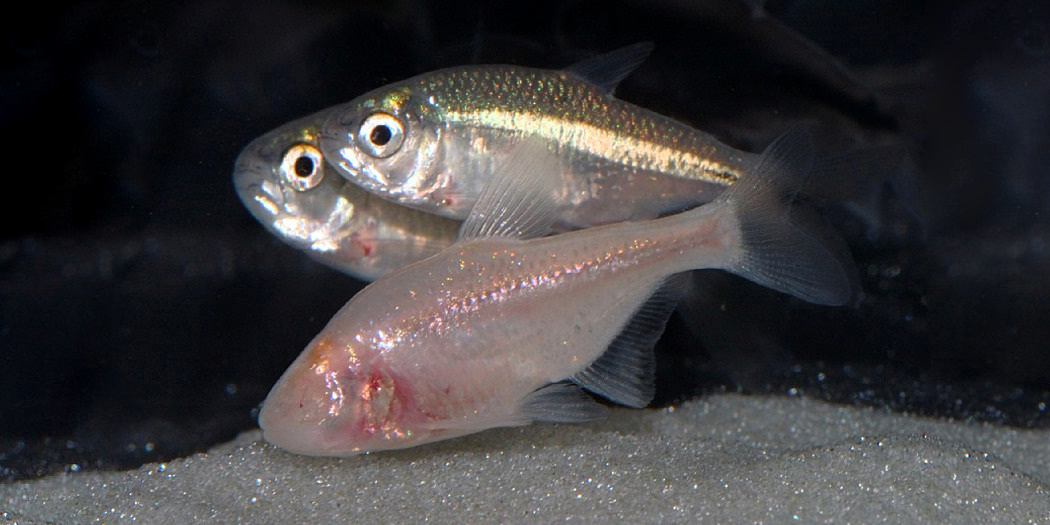 The blind Mexican cavefish (pink) and its surface-dwellling counterpart (silvergrey).

With its hundreds of thousands of nerve cells, the vertebrate brain is the most complex organ in the animal kingdom. During vertebrate evolution not only have the number of neurons and consequently the volume of the brain increased, but there has also been an expansion in the number and diversity of cell types with different functions. The question of how this incredible diversity of cells evolved and how the repertoire of cell types differs between species has, however, remained largely unresolved.

Genetic diversity leads to new cell types
To address this question, Dr. Maxwell Shafer in the lab of Prof. Alex Schier at the Biozentrum investigated the hypothalamus in different fish species and in variants of the same species. This region of the brain controls the sleep-wake cycle, feeding and social behaviors. “We found that some nerve cell types and the genes coding for them are unique and species-specific,” says Maxwell Shafer, first author of the study. “Evolution works on genes. We show that the evolution of new genes is associated with the evolution of new cell types. It is exciting to speculate that these cell types are generating new behaviors that are distinct between species.”

Species-specific nerve cell types to conquer new habitats
For their study, the scientists first compared the zebrafish with the blind cave-dwelling Mexican tetra, two different species, with a last common ancestor that lived around 150 million years ago, before the supercontinent Pangaea broke apart. They identified around two hundred neuronal cell types in the hypothalamus, about 25 percent of them were species-specific.

The researchers were quite surprised when comparing the blind cavefish with its non-blind conspecific that lives at the water’s surface. Despite the comparatively short time of only 250'000 years that these variants have evolved separately, the cell types of the two already differ by around 10 percent. “We expected that the difference would be much smaller in fish of the same species,” says Shafer. “This evolution of the cavefish nerve cells may have helped them adapt to living in a cave.”

From cellular diversity to behavior
In the course of evolution, the blind cavefish developed unique behavioral patterns compared to its non-blind counterpart. For example, the cave-morphs do not sleep, continuously search for food and no longer school with other fish. The 10 percent of different nerve cell types in the hypothalamus may offer clues to how the blind morphs are able to live in dark caves.

The duplication of genes could play a key role in such adaptation processes. The gene copies are passed onto the next generation and change over time. “As a result, the cells can acquire new functions, which could generate new cell types and maybe even new behaviors,” explains study leader Alex Schier. “Our study supports the classic theory that gene duplication drives evolution”.