Prof. Richard Neher from the Biozentrum of the University of Basel is using his Nextstrain platform to investigate which variants of the SARS-CoV-2 virus are currently circulating worldwide. The possibilities for future mutations are extremely wide ranging. Within Omicron alone, there are three variants circulating at the moment. 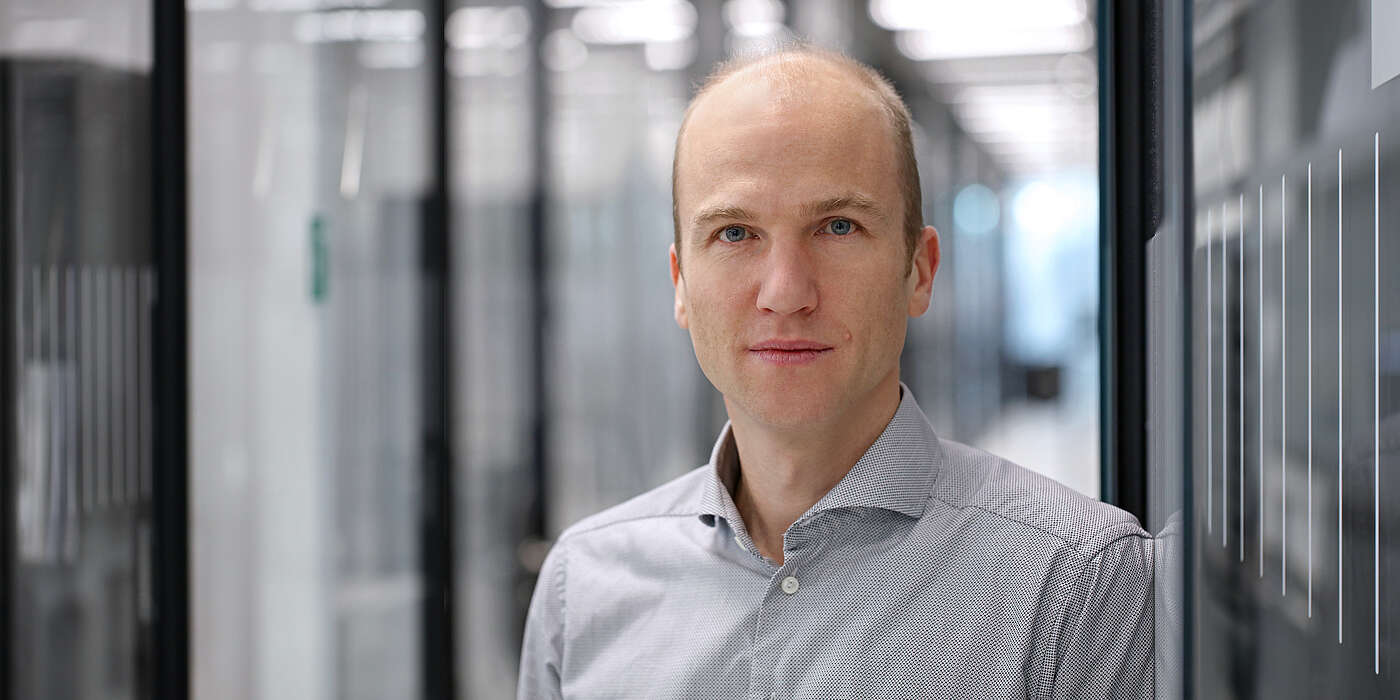 There is talk about Omicron being the beginning of the end and the start of an endemic situation. What exactly does that mean?
If the pandemic becomes endemic, it means that a certain balance is established between the virus and us humans as the host. The virus would circulate continuously worldwide, probably in waves, in which the changing immunity of the population and the infections from the virus balance each other out. Endemic is no statement about severity – viruses can be both severe and endemic, like for example Polio.

So we can't really speak of an end then?
Well, the pandemic will probably end. But the virus won't go away. The virus will stay and circulate recurrently, presumably seasonally.

Are we already in such an endemic situation, or is it near?
The transition from pandemic to endemic is not a sharp boundary. In other words, the path to an endemic situation is bumpy. Omicron’s rise is very steep and an equilibrium has not yet been established. But we're getting to a point where almost everyone has some degree of immunity, either through the vaccination or infection. This reduces the burden of disease that the virus can cause. At the moment, however, the ups and downs are still too rapid and the number of immunologically naive individuals is still too large to speak of an endemic situation.

If we reach an endemic situation, will SARS-CoV-2 be like the flu for the population?
There are certainly similarities to the flu virus or other cold viruses, some of which are also coronaviruses. The protection through vaccination or infection decreases over time, on the one hand because the virus changes and on the other hand due to a falling antibody level. Hence past infections or vaccinations do not provide permanent protection and reinfections are common with these other viruses. However, it is not yet clear how often we will become infected with SARS-CoV-2 in the future.

How severe would the course of the Omicron wave be compared to an influenza wave?
The severity of future waves cannot be predicted at the moment. It could be worse or less serious than a typical flu winter wave. What the "new normal" will look like in the future will depend a lot on how severe these future SARS-CoV-2 waves will be.

Reinfections currently occur after a very short time. That is why booster shots are recommended in some countries already after only three months. Is it possible that we will have to be vaccinated every three months in the future?
I don’t think so. At the moment I expect that we will observe a seasonal cycle, as with other cold viruses. In summer the virus circulates less and in winter we have smaller or larger waves. Fall would then be a typical time for a booster vaccination.

For the entire population or only certain groups of people?
A booster shot will be particularly important for vulnerable groups, such as the elderly, and those with pre-existing conditions. They benefit the most. Especially, knowing that the protection from virus transmission is limited in time, individual protection through vaccination is all the more important for these groups.

Apart from vaccinations, what would an endemic situation mean for our future lives?
That depends on how severe the waves will be. Wearing masks during periods of high circulation may remain with us. In the medium term, it may also be possible to reduce the spread of corona and other viruses through improved ventilation systems or other preventive measures.

What is different about the coronavirus compared to the viruses whose spread you have investigated so far?
With no other virus have we seen such rapid evolutionary jumps in such a short time. Variants such as Omicron or Alpha have changed at many sites without us having observed any precursors. Omicron has 30 to 40 mutations in the spike protein, Alpha had about 10 mutations. Especially when a virus like SARS-CoV-2 is being studied so closely, it is extremely surprising when a variant with so many mutations just appears out of nowhere.

Do we know more about the origin of Omicron in the meantime?
What we do know is that three variants of Omicron are currently circulating. In addition to the dominant variant, there are two sister variants that share about half of the Omicron mutations, but also have many other mutations in addition. There is the main variant BA.1, a sister variant BA.2, which is spreading relatively rapidly in Scandinavia, India and the Philippines, and finally a sister variant BA.3 with limited circulation. This diversity makes the origin of Omicron even more mysterious. We still cannot explain its atypical evolution.

Could there be another Omicron wave with either sister variant?
The variants are so similar in the relevant regions of the spike protein that cross-immunity between these variants is extremely likely. However, BA.2 appears to be spreading faster and it may be that BA.2 continues to increase, becomes dominant and causes a second peak, or just extends the Omicron wave a little.

What does this mean in terms of the future evolution of the virus?
It shows once again how flexible the virus is and that we must be prepared for further surprises.

From a purely virological point of view, isn't Omicron a kind of "lucky coincidence", with which infections to achieve herd immunity could be risked?
Of course, if we had to choose, Omicron is preferable to Delta for achieving immunity through infection as it seems to have a milder disease course in many people. But considering that long term herd immunity is not achievable, not all Omicron infections are mild, and long term risks of the infection not well understood vaccination is definitely preferable to Omicron. It also seems that an Omicron infection does not protect well against an infection with Delta or other variants – at least if there was no immunity to Delta prior to infection. So the Omicron wave does not necessarily protect us from further waves in the future.

Could there be variants that lead us back to square one?
That is very unlikely. Our immune system not only recognizes and fights the virus with antibodies but also with its T cells. And T cell immunity is much harder for the virus to evade because our T cells, unlike antibodies, recognize the virus by many different parts. In addition, different people's T cells recognize the virus by different parts. Therefore, escaping an individual’s T cell response gives the virus little advantage in spreading. T cell escape mutations are thus slow to take hold, if at all, at the population level. This is different with antibodies: Most people’s antibodies recognize more or less the same sites on the surface of the spike protein. Mutations in these areas allow the virus to evade immunity of many people and thus these mutations spread.

Does that mean that we, as a whole, are making it particularly difficult for the virus through different immune responses?
In terms of T cells, sure. And the antibodies will also accumulate more diversity over time. Future variants will hopefully not develop and spread as quickly as Omicron does now. Evolution is always particularly fast when there is a consistent selection pressure in one direction. Thus, once everyone has been vaccinated or infected with different variants, an immune escape variant can only reinfect a part of the population.

Can future variants be predicted?
Omicron has surprised me and most of my colleagues. But in the future, after we learn more about the evolution of the virus and it becomes a little more gradual, it might be possible. We already make such predictions for influenza.

What are scenarios for future variants?
Omicron might evolve further and beget a daughter variant, an old variant might reemerge, or an entirely new variant might develop. The development of hybrids, for example the creation of new variants through the recombination of old variants, would also be possible – this is something we already know from other coronaviruses.

What would that mean?
For example, it is possible that Delta comes back. It is a highly transmissible variant that might be competitive against Omicron again once immunity against it has waned. Unfortunately, Delta often leads to severe disease. Or another variant with unknown properties may appear. We must therefore continue to monitor the development and emergence of new variants closely, so that we can discover new variants at an early stage and understand their properties in order not to be caught unprepared by a new wave. What these waves will look like in the end and when exactly they will come cannot be predicted at the moment.

NEXTSTRAIN
Richard Neher developed Nextstrain (nextstrain.org) together with his colleague Trevor Bedford from the Fred Hutchinson Cancer Research Center in 2015. The idea of Nextstrain goes back to research on the flu viruses. The two researchers wanted to find out to what extent evolution can be predicted. This is an important question, especially for the flu, because the seasonal influenza vaccine has to be updated every year. Forecasting can make the vaccine formulation more effective. With Nextstrain, a wide variety of viruses  can be analyzed, be it SARS-CoV-2, influenza virus, or dengue, Zika or Ebola virus. Epidemiologists, virologists and health experts around the world use this tool to see in almost real-time how the pathogens change and spread. Newtstrain.org