Blood vessel formation relies on the ability of vascular cells to move while remaining firmly connected to each other. This enables the vessels to grow and sprout without leaking any blood. In the current issue of “Nature Communications”, scientists from the Biozentrum at the University of Basel describe how this works. In this process, the cytoskeleton pushes the cell forward, while an adhesion protein subsequently closes the gap to the neighboring cell, like a zipper. 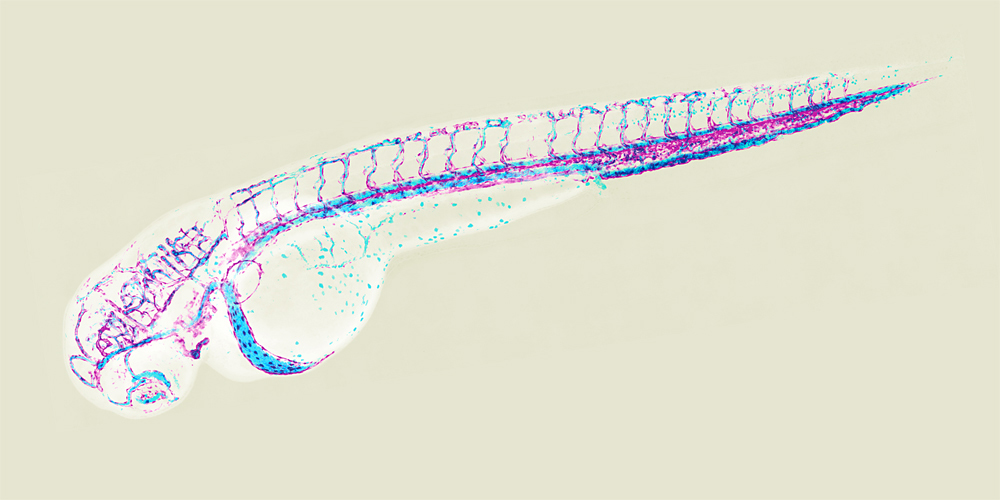 The blood vessels form a widely ramified supply system that passes through our body from head to toe. They serve as pathways for blood cells and transport oxygen as well as nutrients into each individual organ. In the embryo, blood vessels develop simultaneously in many different places, then connect with each other and thus form a complex network. The starting point of vascular growth are the so-called endothelial cells. These can migrate in groups out from a vessel and form new tubes, the capillaries.

Prof. Markus Affolter's team at the Biozentrum of the University of Basel uses the zebrafish as a model organism to investigate the development of blood vessels. In their current study, the scientists have shown that endothelial cells can migrate within vessel sprouts while remaining firmly attached to each other. If the cells were unable to remain attached, bleeding into the surrounding tissue would occur during vascularization.

Vascularization: constant rearrangement of endothelial cells
The transparency  of the zebrafish embryo allows researchers to observe blood vessel formation live in the living organism. High-resolution time-lapse imaging of vascularization shows that the endothelial cells move over each other to form a capillary, thereby continuously rearranging their position in the newly forming vessel. Dr. Heinz-Georg Belting, head of the study, took a closer look at this process.

Migration and connection of vascular cells
During the rearrangement of the endothelial cells in the vessel, it is important that the cells elongate and migrate while constantly maintaining cell-cell junctions. The adhesion protein VE-cadherin and the cell skeleton play a crucial role in this process. "These two players must work closely together during these active cell movements," says Belting. "The cytoskeleton takes the first step; it ensures the elongation of the cell. VE-cadherin then anchors the cell protrusions to the neighboring cell. An additional protein finally stabilizes the newly formed endothelial cell junction. This repetitive process enables the cell to slowly creep forward." This mechanism works like a zipper, as soon as the cell has moved a little, the gap to the adjacent endothelial cell is closed.

Plasticity ensures growth and flexibility
The fact that the endothelial cells are very motile during blood vessel formation and yet always stay firmly connected ensures the plasticity of the vessel while maintaining its stability. "The ability of endothelial cells to recognize each other, to migrate and to form cell junctions prevents damage during growth. Furthermore, the blood vessels are flexible to respond to different conditions, such as fluctuations in blood pressure," says Belting "This plasticity also plays a role in wound healing, inflammation and immune response.”