Age-related muscle loss has a huge impact on autonomy and life quality of the elderly. Animal models help us to better understand the ageing process and discover new treatments. The extrapolation of these findings to humans, however, has its limitations. For this reason, researchers at the Biozentrum of the University of Basel investigated the suitability of established rodent models for studying muscle aging in humans. Along with identifying similar mechanisms, they also uncovered new therapeutic targets. 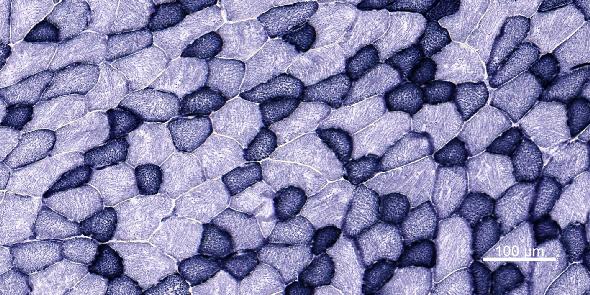 Muscle section showing the activity of a mitochondrial enzyme involved in cell respiration and energy production.

You are likely to lose around one third of your muscle mass over your lifetime. An excessive loss of muscle mass and muscle strength is known as sarcopenia. As life expectancy increases, so does the number of people suffering from age-related muscle weakness. It is estimated that in 40 years, some 200 million people worldwide will be affected. Physical training and an appropriate diet can partially counteract sarcopenia, however, there is currently no drug available to treat this disease.

As sarcopenia develops gradually in humans over decades, scientists often use model organisms with shorter lifespans to investigate this phenomenon. However, species-specific characteristics set limits to the relevance of such animal models.

Model organisms for sarcopenia on the trial
Researchers led by Prof. Mihaela Zavolan and Prof. Markus Rüegg at the Biozentrum, University of Basel, investigated which animal model is most suited to answer which questions about sarcopenia. In their study, they also identified therapeutic targets and demonstrated that clinical parameters, such as muscle mass or strength, are better indicators of muscle health than chronological age.

“Every individual ages differently. This is an important aspect when studying aging processes,” says Zavolan “When you relate molecular data to age alone, you run the risk of overlooking possible influencing factors or correlations.” Multiple factors cause age-related muscle weakness. Protein synthesis decline, inflammatory processes and damage to genetic material as well as mitochondria, the power stations of the cell, all weaken muscles and impair their function.

Early intervention to prevent muscle atrophy
In their work, the scientists systematically compared clinical and gene expression data of mice, rats and humans over time. “In principle, rodents are a suitable model to study sarcopenia, even though they differ from humans in some aspects,” says Zavolan. “In particular, the age-related changes in muscle metabolism and signaling pathways, such as mechanisms regulating muscle protein synthesis or mitochondrial functionality, were quite similar across species. Interventions improving mitochondrial health could help slowing the rate of sarcopenia.”

In contrast to mice and rats, the first signs of muscle changes in humans occurs already during middle age and molecular changes do not develop gradually but in two distinct waves. “It is therefore important that we change our daily activities rather early in life to prevent the loss of muscle mass,” emphasizes Rüegg. “It would also be desirable to develop methods for the early recognition of sarcopenia.”

The complete data set with the phenotypic and gene expression data is available to scientists worldwide on the interactive platform “SarcoAtlas”.