Although bacteria have no sensory organs in the classical sense, they are still masters in perceiving their environment. The research group led by Prof. Urs Jenal at the Biozentrum, University of Basel, has now discovered that bacteria not only respond to chemical signals, but also possess a sense of touch. In two publications in “Science” and “eLife”, the researchers demonstrate how bacteria recognize surfaces and respond to this mechanical stimulus within seconds. This mechanism is also used by pathogens to colonize and attack their host cells. 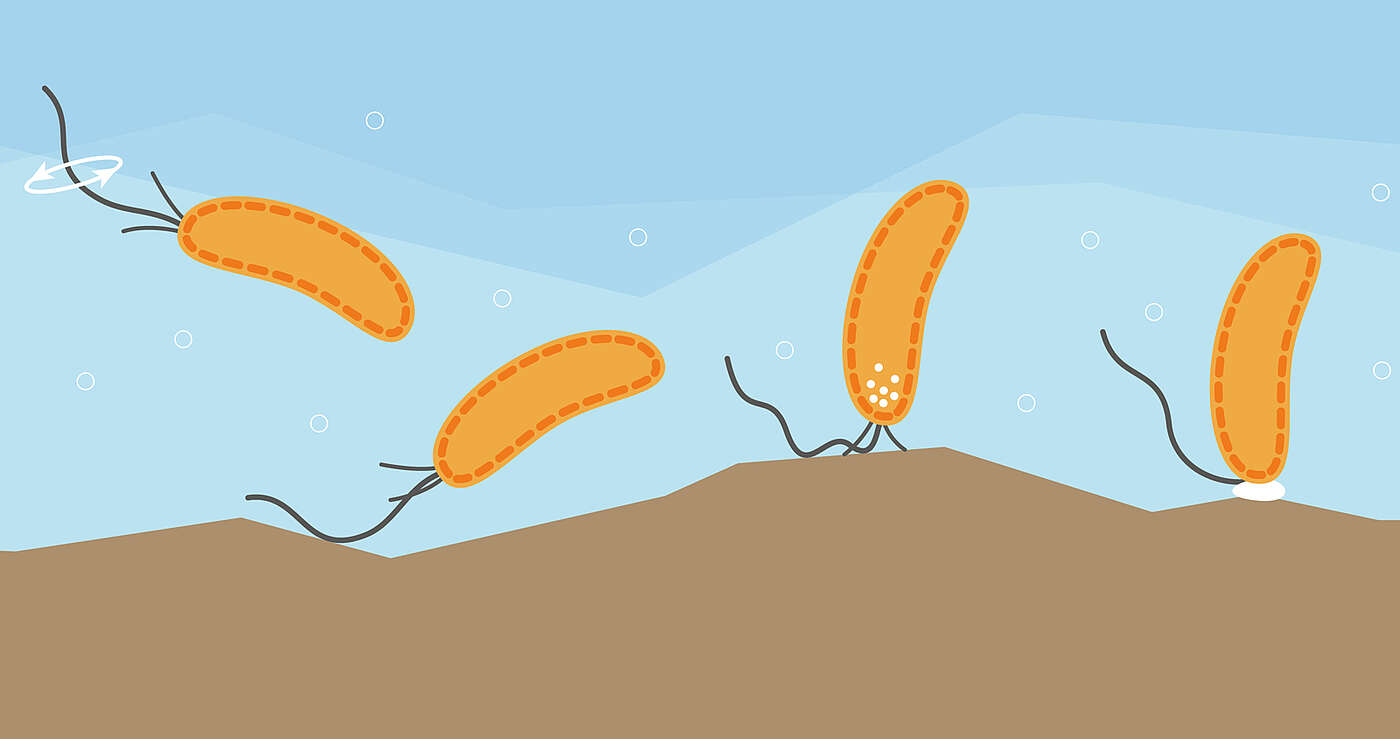 Sense of touch: Swimming bacteria can sense surfaces with the flagellum.

Be it through mucosa or the intestinal lining, different tissues and surfaces of our body are entry gates for bacterial pathogens. The first few seconds - the moment of touch - are often critical for successful infections. Some pathogens use mechanical stimulation as a trigger to induce their virulence and to acquire the ability to damage host tissue. The research group led by Prof. Urs Jenal, at the Biozentrum of the University of Basel, has recently discovered how bacteria sense that they are on a surface and what exactly happens in these crucial first few seconds.

Research focused only on chemical signals
In recent decades, research has made enormous progress in exploring how bacteria perceive and process chemical signals. "However, we have little knowledge of how bacteria read out mechanical stimuli and how they change their behavior in response to these cues," says Jenal. “Using the non-pathogenic Caulobacter as a model, our group was able to show for the first time that bacteria have a ‘sense of touch’. This mechanism helps them to recognize surfaces and to induce the production of the cell's own instant adhesive.”

How bacteria recognize surfaces and adhere to them
Swimming Caulobacter bacteria have a rotating motor in their cell envelope with a long protrusion, the flagellum. The rotation of the flagellum enables the bacteria to move in liquids. Much to the surprise of the researchers, the rotor is also used as a mechano-sensing organ. Motor rotation is powered by proton flow into the cell via ion channels. When swimming cells touch surfaces, the motor is disturbed and the proton flux interrupted.

The researchers assume that this is the signal that sparks off the response: The bacterial cell now boosts the synthesis of a second messenger, which in turn stimulates the production of an adhesin that firmly anchors the bacteria on the surface within a few seconds (video). “This is an impressive example of how rapidly and specifically bacteria can change their behavior when they encounter surfaces,” says Jenal.

Feedback loop amplifies the bacterial sense of touch
In a proceeding study, the team, together with Structural Biology groups at the Biozentrum and a group at Yale University (USA), then discovered a feedback mechanism that boosts the initial signal of the blocked motor in the cell. “The amplifying proteins capture the second messenger, move back to the motor and increase its sensitivity to mechanical stimuli. As a result, even more messenger molecules are produced.” This feedback loop makes the production of the glue and the cell’s attachment to the surface rapid and efficient.

Better understanding of infectious diseases
“Even though Caulobacter is a harmless environmental bacterium, our findings are highly relevant for the understanding of infectious diseases. What we discovered in Caulobacter also applies to important human pathogens,” says Jenal. In order to better control and treat infections, it is mandatory to better understand processes that occur during these very first few seconds after surface contact.