Phages are viruses that infect bacteria. They are an important part of many of the Earth’s ecosystems and can also play a role in the fight against antibiotic resistant pathogens. The team led by Dr. Alexander Harms from the Biozentrum, University of Basel, has now compiled a significant phage collection. It is available to scientists around the world for research purposes, as a biotech tool or to explore which phages are most suitable for therapy. 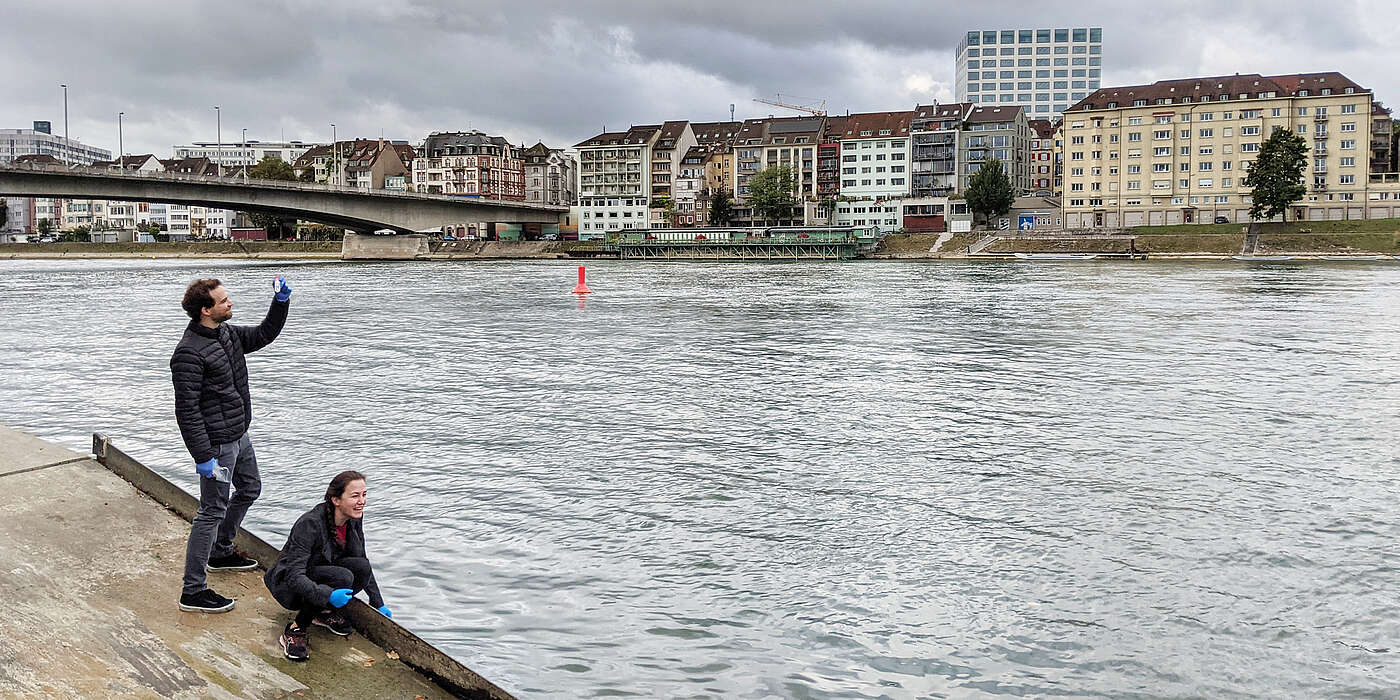 Researchers taking samples from the Rhine River in order to isolate new phages.

The abundance and diversity of viruses on our planet is unimaginable. It is estimated that there are about a trillion virus particles on each grain of sand. Many viruses are still waiting to be discovered. The majority of them exclusively attack and destroy bacteria. For this reason, they were named bacteriophages – bacteria eaters – by the scientist who discovered them, the French researcher Félix d’Hérelle. These phages have an impact on whole ecosystems, from the ocean to the human microbiome. In medicine, they are currently experiencing a renaissance as an alternative to antibiotic therapy.

In their study, published recently in PLoS Biology, the team led by Dr. Alexander Harms, an Ambizione Fellow at the Biozentrum of the University of Basel, working together with high school students participating in the Basel Summer Science Academy at the Biozentrum, isolated and characterized a large number of bacteriophages in samples from the Rhine River, as well as from garden ponds, soil, compost bins and sewage plants in and around Basel. “We have established a worldwide unique collection of 70 phage species, that scientists can now draw on for their work”, says Harms. “Our collection provides both comprehensive information about the diversity of phages as well as essential knowledge for the development of phage therapies.”

Seeking new phages in nature
The original idea was to study phages that attack “sleeping” bacteria. Such bacteria pose a problem because they cause chronic infections such as urinary tract infections or pneumonia and antibiotics are often not effective. “The known phages have proven to be powerless against these persistent bacteria. That’s why we have started to isolate new phages that infect our model organism, the gut bacterium Escherichia coli,” explains Harms. “Together with the gymnasium students we found many new phage types in Basel and the surrounding region.”

Comprehensive and systematic phage analysis
The researchers then systematically examined the unknown phages. They sequenced the complete genomes, performed electron microscopy, and characterized the phages in terms of traits such as the bacterial host range or the recognition of surface molecule serving as entry points. The researchers also investigated their sensitivity or, in other words, the resistance to bacterial defense systems such as restriction enzymes, for the discovery of which Werner Arber was awarded the Nobel Prize in 1978. The comprehensive genome data, including the associated biological information makes the phage collection so valuable. They are the key to predicting the characteristics of newly isolated phages and for instance to determine, whether they infect only one bacterial strain or even different species.

“Most of our bacteriophages have a very limited range of hosts, infecting only a very specific bacterial strain”, explains Harms. “However, we also found individual groups of phages that bind to an evolutionarily conserved surface molecule that is present in various E. coli strains as well as in Salmonella.” These phages target diverse types of bacteria like broad-spectrum antibiotics. Such knowledge about viruses is crucial for the development of treatments based on synthetic phages.

Phage collection for research purposes
“Our Basel phage collection confirms that similar phage groups occupy the same ecological niches worldwide, whether in China, the USA or South America. That really surprised me,” adds Harms. “Our phages serve as a reference and a flexible tool for further studies in this field. I am already receiving many requests from around the world.” With their very diverse phage collection, the scientists now want to further pursue their original question: Whether and how phages can eliminate antibiotic tolerant bacteria in deep sleep. And if the Covid-19 situation allows it, there will be another Summer Science Academy for students from the Basel region next year.