Shortly after the uptake of molecules at the cell surface, the cell decides whether to recycle them or transport them into the cell. Cells thus start their recycling process much earlier than previously assumed. This has been shown in the latest study of Prof. Anne Spang's research group at the Biozentrum of the University of Basel. 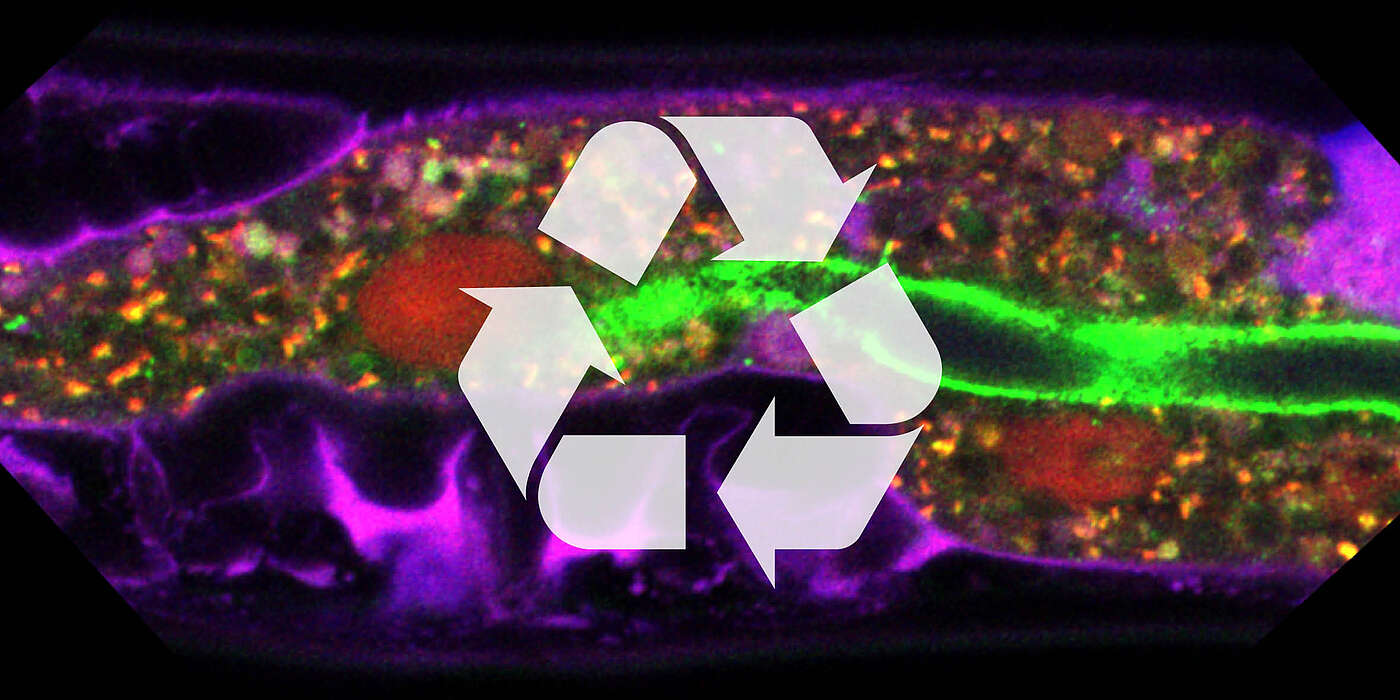 Recycling in intestinal cells in worms: The cargo (magenta) is taken up into cells, sorted in endosomes (red) and brought back in vesicles (green) to the cell membrane.

Cells live and survive by taking up proteins, recycling and reusing or degrading them. The proteins are located on the cell surface and are transported from here into the cell’s interior. About 80 percent of these membrane proteins are recycled by the cell and returned to the surface.

This recycling system is extremely sophisticated and even more efficient than previously assumed. The team led by Prof. Anne Spang at the Biozentrum of the University of Basel has now been able to demonstrate this in cells of both nematodes and mammals. The results have now been published in the scientific journal “Nature Communications”.

Early sorting within seconds
Cells take up receptor proteins on their surface by packing them into small vesicles and transporting them into the cell. The first sorting station is located just below the cell surface. Already here, the protein complex FERARI assists in deciding the fate of the cargo. Prof. Anne Spang's research team discovered FERARI in their previous study. "Now we have learned that FERARI is involved in deciding whether the transported cargo should be recycled immediately after its uptake into the cell," explains Spang.

Part of the cargo is tagged at the sorting station, then re-packed, transported into the cell and later degraded. The other part - the proteins intended for recycling - remain in the vesicle and are directly returned to the cell membrane. This selection process takes place within seconds. By starting recycling immediately, the cell avoids long transport routes. "We did not know that the recycling process already starts at such an early stage, i.e. from the moment the proteins are packed. This saves time and energy. The cell’s transport and recycling system is thus even more effective than we thought," emphasizes Jachen Solinger, first author of the study.

Reliable, robust and efficient recycling
The process of transport, sorting and recycling of proteins is vital for cells. On the one hand, the system is robust and extremely efficient, and on the other hand, it is spread over many individual steps. In this way, the cell ensures that all transported proteins ultimately end up in the right place, defective ones are removed, and those that are still usable are recycled. "The recycling system of the cell is fascinating and amazing. Nature has undoubtedly developed a recycling system in the cell that can hardly be topped in terms of reliability, speed and efficiency," says Anne Spang.