Cilia are small hair-like organelles that extend from cells and perform many functions, including motility and signaling. Together with collaborators at the University of Geneva and Human Technopole in Milan, Prof. Ben Engel's group at the Biozentrum, University of Basel, has now revealed that cilia have a specialized transport hub at their base, where trains and cargos are assembled for transport throughout the cilia. Since defects in this cilia transport system can lead to e.g. cystic kidneys or blindness, the results published in Science also provide new insights into molecular basis for a variety of diseases. 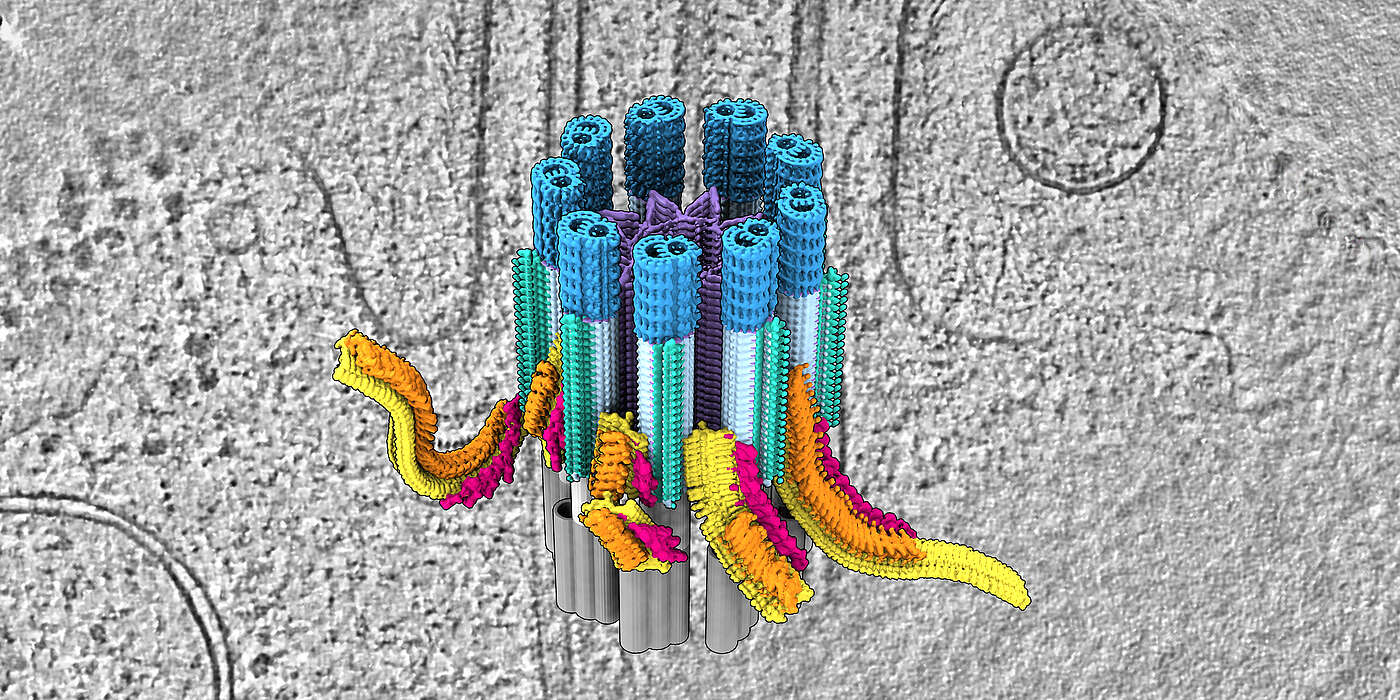 Cilia perform numerous functions for the cell: they help cells swim, move fluid, and send messages to each other. Cilia ensure that we can see, they remove substances from the lungs, move fluid in the brain, and enable us to perceive smells and sound. They are also essential for our development and the correct arrangement of our organs. If their function is disturbed, a wide variety of diseases can result, including heart, kidney, and lung diseases, blindness or infertility.

The assembly and function of cilia relies on large trains of proteins that carry important cargos out to the ciliary tip and back to the base. Even the smallest mutations in individual components can paralyze the traffic inside cilia.
The research team led by Professor Ben Engel at the Biozentrum of the University of Basel together with colleagues at the University of Geneva and the research institute Human Technopole in Milan has now succeeded in examining cilia in their natural environment. Their analysis revealed the native 3D structure of the ciliary base for the first time. Here, they discovered a busy transport hub, with trains being assembled and loaded in preparation for their journey into the cilia.

Loading station for cilia transport
Cilia are firmly anchored to the cell at their base. "Here is the start station for cilia transport," explains Hugo van den Hoek, first author of the study. "Trains are assembled here, loaded with cargo and placed on the rails." There are a total of nine different rails inside cilia, called microtubules. Each of them consists of two tracks, one for outbound trains and one for inbound. The trains transport proteins such as signaling molecules and building materials to the tip of the cilia. At their destination station, the train is unloaded and disassembled.

The team examined the composition of the assembling trains in detail, revealing the order with which the train components are put together at the ciliary base. They also imaged structures at the base that serve as a selective barrier. “This regulates the entry of large trains until they are fully assembled and loaded with the cargo proteins required for the construction and maintenance of the cilia," says van den Hoek. “From fluorescence microscopy, we also know the exact timetable of the trains. Trains leave the start station within nine seconds, and then the whole train assembly process starts again.”

Organelles in 3D
The researchers resolved the structure and composition of the ciliary base with the help of two complementary imaging methods. The research groups of Ben Engel in Basel and Dr. Gaia Pigino in Milan performed cryo-electron tomography, which reveals native cellular structures with exquisite molecular detail. Researchers headed by Dr. Virginie Hamel and Professor Paul Guichard in Geneva added data from Expansion Microscopy, which allowed numerous proteins to be localized and mapped onto the tomography structures. “This powerful combination of technologies has allowed us to reconstruct the first molecular model of the ciliary base and observe how it regulates the assembly and entry of these large protein trains,” explains Paul Guichard.

"Understanding the transport system and its logistics in detail helps us understand how cilia are built and function, which may also provide new ideas for therapies to cilia diseases," says Engel. In a next step, he and his collaborators would like to examine what happens at the ciliary tip: how this end station is structured and how the return transport is organized.