The cell scaffolding holds muscle fibers together and protects them from damage. Individuals who suffer from muscular dystrophy often lack essential components in this cell scaffold. As a result, their muscles lack strength and become progressively weaker. The research team of Prof. Markus Rüegg at the Biozentrum, University of Basel, has now designed two proteins that stabilize the cell scaffolding, link it to the muscle fiber and thereby restore muscle structure and function. Their findings are published in the current issue of “Science Translational Medicine”. 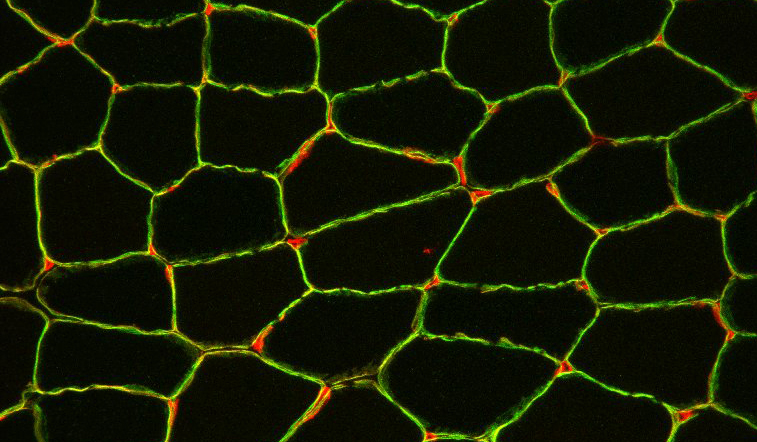 Cross section of a muscle biopsy: Blood vessels (red) between the muscle fibers and laminin-α2 (green), which surrounds each muscle fiber.

Muscular dystrophy is a term used to describe many different muscular diseases caused by genetic defects. To date, there are no treatments available to stop disease progression. In their study, the scientists led by Prof. Markus Rüegg have investigated a specific type of muscular dystrophy, called congenital muscular dystrophy. In an animal model, they demonstrated for the first time that two proteins designed by the researchers not only recover muscle force and increase body weight in the sick animals but also significantly prolong survival.

Severe impairments due to congenital muscular dystrophy
Congenital muscular dystrophy is a rare and severe form of a muscular dystrophy that presents at birth or during infancy. “The children born with this disease are also called ′floppy infants′ because of the poor muscle tone and weakness,” says Judith Reinhard, first author of the study. “The disease becomes more severe with increasing age, as the muscle wasting progresses.” Affected children are often unable to walk independently or they lose this ability with age. The respiratory muscles are also affected. The lifespan is often short and many patients die before reaching adulthood.

Defective gene – defective cell scaffolding
This form of muscular dystrophy results from a genetic defect in laminin-α2. This protein is a key component of the cell scaffolding and connects it with the inner part of the muscle fiber, ensuring the stability of the tissue. Consequently, as a result of gene defects in laminin-α2 the muscles are extremely unstable and even normal use of the muscles leads to muscle injuries, inflammation and finally to the degeneration of muscle fibers. In these diseased muscles, which are unable to produce laminin-α2, another laminin takes over. This protein, called laminin-α4, however, is only a poor replacement because it is not well integrated into the cell scaffolding.

Proteins anchor cell scaffolding and stabilize muscle fibers
The researchers designed two proteins that allow the integration of laminin-α4 and anchor it to the muscle cell. “Using these linkers, we were able to stabilize the muscle fibers,” explains Rüegg. “When animals with a laminin-α2 defect express the two linkers, there was a significant improvement in muscle structure and force and an increase in body weight. We were particularly pleased to observe that these animals also had an almost normal lifespan. Some of them even survived their healthy siblings.” Furthermore, the scientists examined muscle biopsies of patients with congenital muscular dystrophy. They found very similar structural defects and laminin-α4 was also found in place of laminin-α2 in the diseased muscle fibers.

“Both of the designed linker proteins may possibly be used in the future as a gene therapy treatment for congenital muscular dystrophy,” says Rüegg. “Our study is a nice example of how the understanding of a disease on the molecular and cellular level results in new therapeutic options. We are now interested in whether these linker proteins also improve muscle function as well as affect survival in advanced stages of congenital muscular dystrophy.”