In order to grow in size, cells require many proteins. Their production is regulated by the protein complex “mTORC1”. Researchers at the Biozentrum of the University of Basel have now been able to show at the atomic level, how mTORC1 controls this production. Following a hierarchical order, it gradually changes the conformation of a specific binding partner and thus indirectly initiates protein biosynthesis. 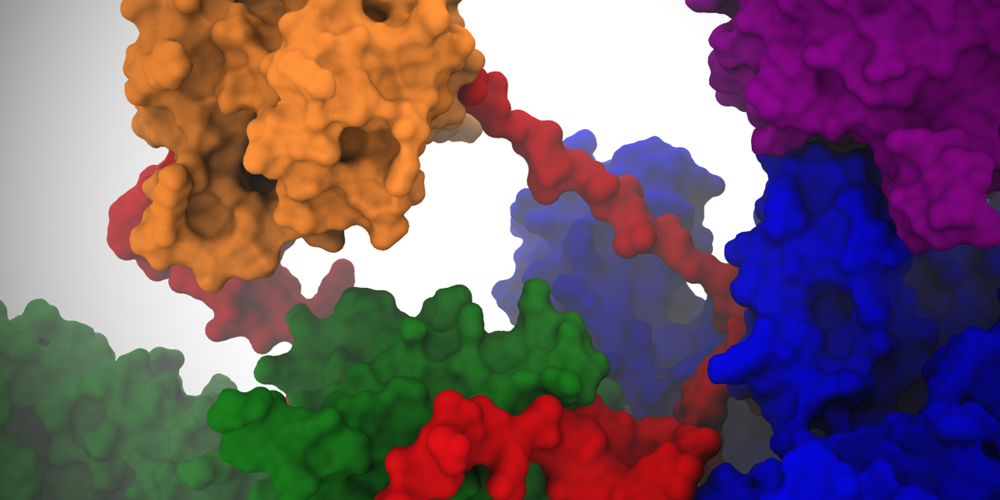 Cells proliferate by dividing repeatedly. Each cell division produces two daughter cells, which must first grow to a certain size before they can divide, too. This requires an increased production of cell components, including proteins. Cell growth is tightly controlled to prevent healthy cells from turning into cancer cells.

The growth of cells is controlled by the protein “Target of Rapamycin”, in mammals called mTOR for short. With an adequate supply of nutrients, mTOR stimulates the biosynthesis of proteins that are essential for growth. In a study recently published in “Molecular Cell”, scientists led by Sebastian Hiller and Timm Maier, professors at the Biozentrum of the University of Basel, reported how mTOR in complex with other partners changes the conformation and function of a protein which initiates protein synthesis.

“This work is the result of many years of interdisciplinary research at the Biozentrum,” says Hiller. “TOR was discovered by Prof. Michael Hall almost 30 years ago and, in 2015, Timm Maier solved its structure for the first time.”

mTORC1 starts protein machinery
The so-called mTORC1 protein complex modifies target molecules by adding phosphate groups. This phosphorylation alters the structure and function of proteins, thereby turning signaling pathways on or off. One of mTORC1’s target molecules is the protein 4E-BP1. “In the non-phosphorylated state, 4E-BP1 binds the initiation factor for proteins translation,” says Hiller, explaining this well-known process. “As long as the two proteins remain bound together, no proteins are produced. After 4E-BP1 phosphorylation by mTORC1, the initiation factor is released and starts the protein synthesis machinery.”

New insights into the molecular mechanism
It had already been known that mTORC1 phosphorylates 4E-BP1 at four different sites, following a strict hierarchy. However, the question of how this hierarchy is regulated, still remained open. Using solution NMR spectroscopy, the structural biologists have now been able to solve this puzzle. “4E-BP1 interacts with a component of mTORC1 leading to rearrangements within the 4E-BP1 structure,” says Hiller. “As a result, 4E-BP1 positions itself so that at first only two and then, due to further rearrangements, the remaining sites can be phosphorylated. The conformational changes determine the order of phosphorylation.”

The hierarchical phosphorylation of 4E-BP1 leads to the gradual dissociation and finally to the release of the initiation factor, paving the way for protein biosynthesis. The phosphorylation of all 4E-BP1, the free and bound forms, allows a rapid release of initiation factors and an efficient activation of protein translation. With their work, the researchers provide a comprehensive picture of how mTORC1 modifies its diverse substrates and controls cell growth via various signaling pathways.

How Rapamycin interferes with mTORC1 activity
The scientists have furthermore been able to uncover, in detail, how the cancer drug rapamycin interferes with this process. It inhibits mTORC1 and thus slows tumor cell growth. “Rapamycin make the late phosphorylation sites of 4E-BP1 inaccessible for mTORC1,” explains Hiller further. “This prevents the release of the initiation factor and the synthesis of new proteins. The tumor cells stop growing.” In their study, the researchers have been able to reveal the exact molecular mode of action of the anti-cancer drug for the first time.