Protein aggregates in neurons are characteristic for Alzheimer's, Parkinson's and other neurodegenerative diseases. These so-called amyloids arise from misfolded proteins and lead to cell death. The team headed by Prof. Martin Spiess at the Biozentrum of the University of Basel has demonstrated by the example of the hormone vasopressin that such amyloids in the cell are, however, not always harmful but can also play a quite useful role. The study was recently published in “BMC Biology”. 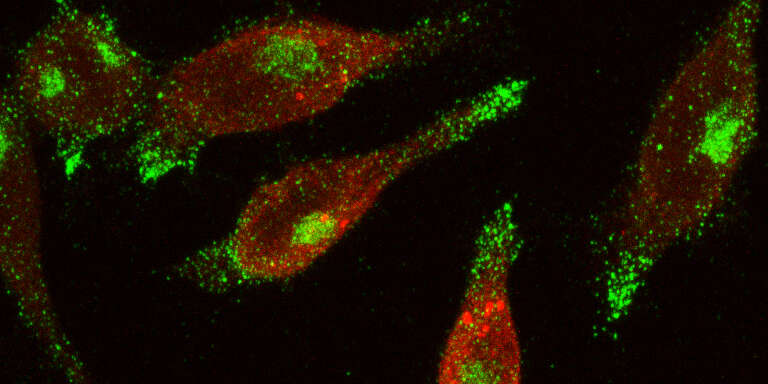 In the past, amyloids have mainly been associated with neurodegenerative diseases. These solid, insoluble protein clumps damage the nerve cells. The research group led by Prof. Martin Spiess at the Biozentrum of the University of Basel has now discovered that aggregates of the hormone vasopressin also fulfill important physiological functions. Vasopressin is stored in the cell in the form of amyloid-like granules. These tiny granules are secreted into the blood as required, where they dissolve and release the hormone.

Cell death – caused by protein aggregates
In neurodegenerative diseases, amyloids cause damage and death of neurons. Also in the case of the hormone vasopressin, only the negative effects of such protein aggregates have been recognized so far: Mutations in the vasopressin gene prevent the correct folding of the defective hormone causing it to be retained in the secretory pathway. This results in the formation of insoluble protein amyloids, which destroy the vasopressin producing neurons in the brain. Patients who have such a gene defect suffer from the disease diabetes insipidus. Since they lack the hormone vasopressin, they excrete instead of the normal one to two liters about ten to twelve liters of urine daily. In the kidney vasopressin ensures that water is reabsorbed into the body and thus concentrating the urine.

Amyloid-like protein aggregates may be functionally important
However, protein aggregation can also have an important physiological function. This has been confirmed by Martin Spiess’ research group. They were able to identify two sequences in vasopressin, which in the mutant protein drive the formation of harmful amyloids. "Interestingly, in the normal hormone the same sequences are responsible for the formation of the natural granules further on in the secretory pathway," explains Spiess. "These are amyloid-like protein aggregates that are physiologically important." Vasopressin, packed into the granules, is transported to the nerve endings and upon stimulation is released into the bloodstream. Thus the granules serve as an intermediate storage for the hormone.

Harmful amyloids - a negative consequence of granule formation
With their work, the researchers have confirmed the hypothesis that the granules of the brain pituitary gland are functional amyloids, which have an important physiological function in the secretion of hormones. Harmful protein aggregates produced by defective proteins appear to be an adverse result of the ability to form granules. The researchers further plan to clarify the effects of vasopressin at the structural level and whether protein aggregates reflect a general principle of granule formation.