Drug resistance is not only a major problem in fighting infectious diseases. Also in the treatment of cancer it can jeopardize the success of chemotherapy. A reason for this are the so-called transport proteins that “pump” the drugs out of the cells. Researchers at the Biozentrum of the University of Basel and the ETH Zurich have now been able to elucidate the three dimensional atomic structure of an important drug transporter. The results recently published in “Nature” provide a basis for counteracting such resistance in the future. 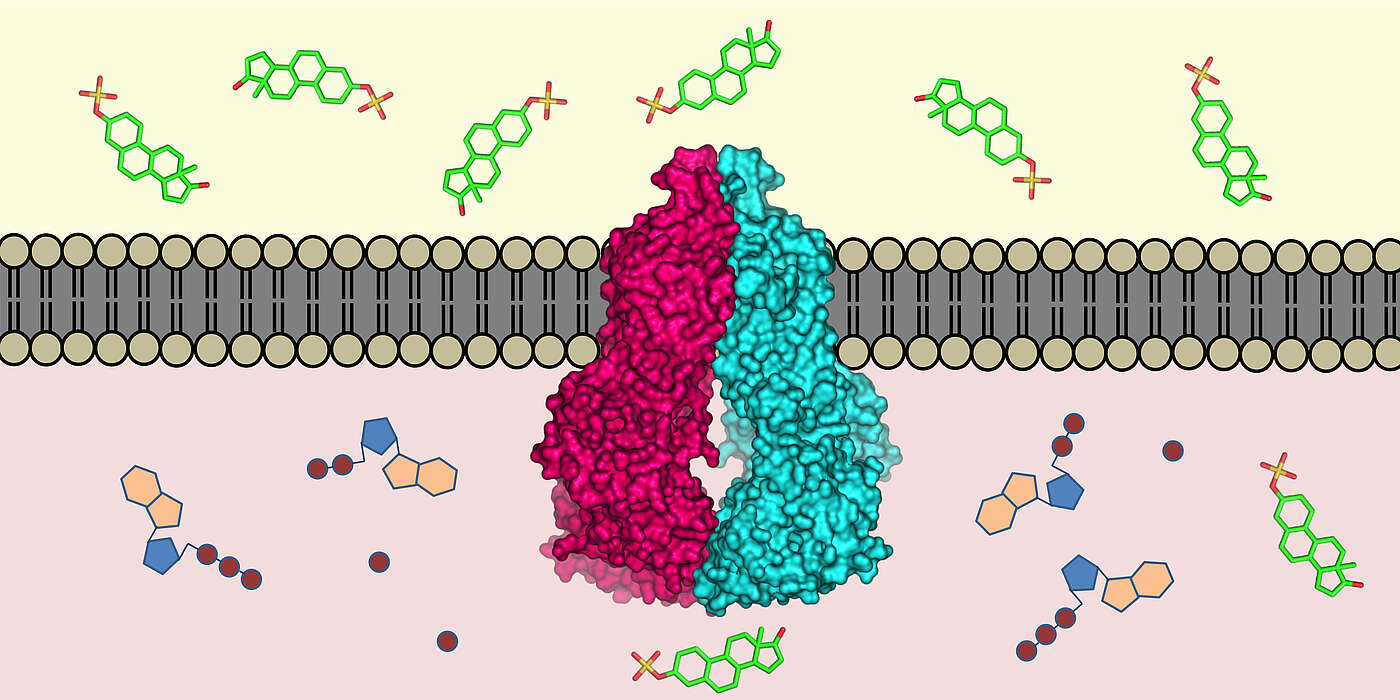 The transport protein ABCG2 is embedded in the cell membrane. It recognises over 200 substances in the cell interior (below) and transports them outside (above). (Visualizations: ETH Zurich / Scott Jackson, Ioannis Manolaridis, Kaspar Locher)

In the course of evolution, the human body has developed diverse strategies to protect itself from harmful substances. In the intestine, the placenta and also in the blood-brain barrier are tiny transport proteins, which prevent the absorption of toxins by “pumping” them out of the cells. This protective mechanism, however, proves to be a double-edged sword, as these transport proteins also extrude a large variety of medical drugs from the cells. This is one reason why cancer cells become resistant to chemotherapeutics. These multidrug resistances are major obstacles in today's cancer therapy.

Atomic insights into transport protein architecture
One of these molecular “pumps” is the protein ABCG2, which was discovered in drug resistant breast cancer cells about 20 years ago and affects the efficacy of drugs. However, despite intensive research, important puzzle pieces regarding its composition were missing due to technical limitations. Prof. Henning Stahlberg, from the Biozentrum of the University of Basel, together with Prof. Kaspar Locher, from the ETH Zurich, have now succeeded in determining the atomic structure of ABCG2. This knowledge is fundamental for the development of drugs to inhibit such drug transports, thus preventing drug resistance of cancer cells.

"Using high-resolution cryo-electron microscopy, we have been able to elucidate the 3D structure of the drug transporter ABCG2 on the atomic level for the first time," says Stahlberg. "My team from the technology platform C-CINA at the Biozentrum, has been working intensively to optimize the resolution of our electron microscopes as well as automating their function. This has now resulted in an extremely fast data analysis pipeline."

Proposed transport mechanism
Based on the atomic structure of ABCG2, the teams of Locher and Stahlberg have proposed a transport mechanism for the protein. Inside the protein complex – the transporter consists of two identical ABCG2 proteins – are two cavities separated by a plug. When a substrate, for instance a chemotherapeutic drug, enters the inward-facing cavity, the structure of the protein changes, whereby the plug opens and allows the substrate to move into the outward-facing cavity, where it is expelled into the surrounding medium. A mechanical coupling ensures that the protein converts to the inward-facing state using ATP energy only after substrate release in order to be prepared for a new substrate entering the inner cavity.

Counteracting drug resistance
The comprehensive and detailed insights into the architecture of this drug transporter opens new possibilities for studying drug transport as well as the functioning of ABCG2. Furthermore, understanding the structural details facilitates the modeling and design of substances that specifically inhibit the transporter protein. In their study, the researchers could successfully “freeze” the state of ABCG2 using antibody fragments. The determined structure shows how such antibodies against ABCG2 can block the transporter and thus prevent the drugs being “pumped out” of the cell.

The study was financed by the National Centre of Competence in Research (NCCR) TransCure [http://www.nccr-transcure.ch].