The antibiotic resistance crisis is forcing us to rethink how to deal with bacterial pathogens. Prof. Médéric Diard’s team at the Biozentrum, University of Basel, has demonstrated that when the diarrhea-causing pathogen Salmonella produces virulence factors it becomes more sensitive to stress. This favors the evolution of stress resistant but harmless variants. Driving the evolution towards non-virulent variants might be an alternative approach to fight bacterial pathogens. 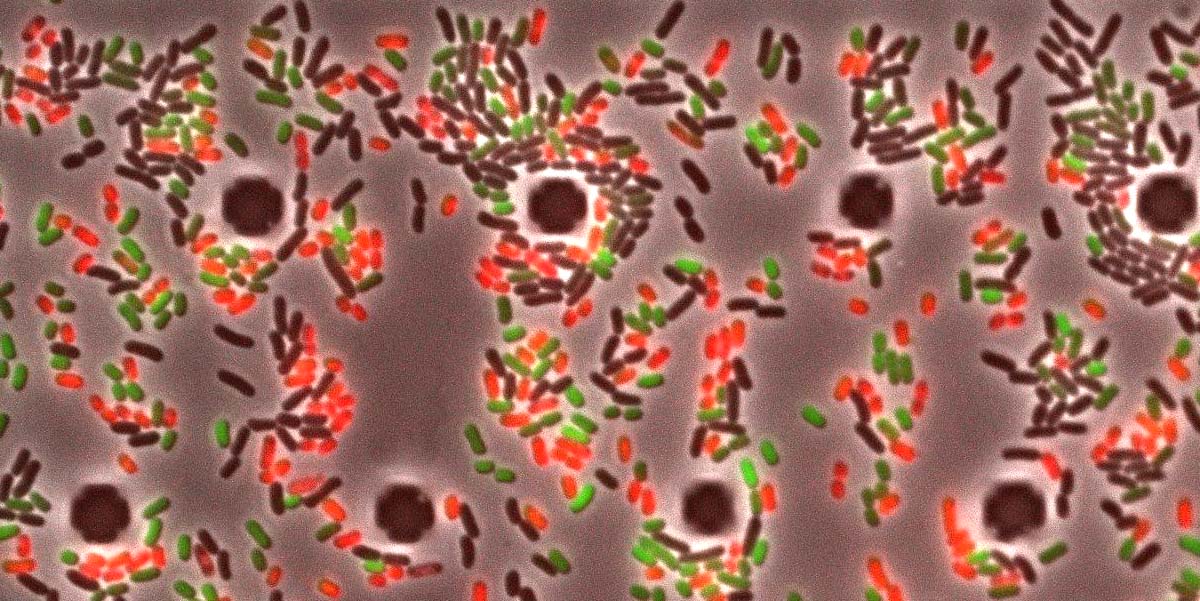 Bacteria are masters of survival. Pathogens, for example, produce a range of molecules enabling them to infect their hosts and to evade the immune defense. The entero-pathogenic bacterium Salmonella enterica Typhimurium uses a whole array of so-called virulence factors to wreak havoc in the gut of infected hosts, including humans. Virulence factors help the pathogen get rid of the microbiota by inducing inflammation and so create a favorable ecological niche.

The production of virulence factor is nevertheless very costly: It reduces the fitness of the pathogen, e.g. the bug grows slower. In their current study, researchers led by Prof. Médéric Diard at the Biozentrum, University of Basel, revealed that virulence also increase sensitivity to certain stress. Conversely, non-virulent variants, less dangerous to the host, are more stress resistant. These findings, recently published in PLoS Biology, are important for developing novel antibacterial strategies that direct the evolution towards non-virulent variants of pathogens.

Division of labor is crucial for bacterial communities
In a natural environment, two subpopulations of Salmonella bacteria divide labor in the gut: Some produce virulence factors while others do not, thus growing fast to colonize the host. Both variants can switch from one state to the other at high frequency. This strategy allows that only a fraction of the Salmonella engages in the virulence program and mitigates the fitness cost for the whole population.

Salmonella critically relies on deploying virulence factors in its membrane to successfully infect the host. “In our study, we monitored the stress resistance of the bacterial envelope in single cells,” says Diard. “It turned out that the production of virulence factors increases the permeability of the membrane and render Salmonella more sensitive to environmental stress such as heat or detergents. These virulent cells eventually die under high stress.” On the other hand, bacteria that have been pretreated with stress stop producing virulence factors thereby increasing the robustness of their membrane.

“This trade-off between virulence and stress resistance could explain why the production of virulence factors is generally repressed in response to harsh environments in Salmonella,” concludes Diard. Moreover, the researchers revealed that in mice the virulence-associated stress sensitivity is a burden for Salmonella during infection, leading to an instability in the virulence, meaning that stress triggered by harsh conditions such as inflammation could contribute to select for non-virulent variants in the gut.

Alternative strategy to fight bacterial infections
The rapid rise of antibiotic-resistant pathogens has led to a growing number of life-threating infectious diseases that cannot be treated by conventional antimicrobial therapies. This silent pandemic is killing more and more people every year. The development of new antibiotics is more important than ever but novel drugs also push the emergence of new resistance.

“We should think all the more about alternatives. Our findings could have a broad impact toward the development of anti-virulence strategies,” explains Diard. “In case of Salmonella, we could drive their evolution in the direction of harmless variants by exposing them to stress.” This evolution-proof concept expands the toolbox of antibacterial treatments and could prevent life-threatening infections.

Médéric Diard
Ecology and evolution of the virulence of pathogenic bacteria